The psychologist observed that when her client wasn’t attempting to mentally escape the room or indeed, her own mind, there was a child seated in front of her. “That is all well and good, but I can’t work with her. She is your responsibility, now that you are a woman. You need to comfort her. She is not in charge anymore, and you need to be.” She grabbed the Babushka doll from her desk, and took it apart, revealing a young adult, an adolescent, then all the way down to an infant. “All these ages are contained in you, as well as the experiences, good and bad. They are waiting to be sorted and acknowledged. I need to talk to the Matryoshka doll, the one who contains all the others. Do you think that is possible?”  The woman nodded, trying to coordinate her breathing (which she had been told was far too rapid), and look at things from an adult point of view, not as a frightened child. A child who didn’t have a choice in anything, from where she was to whom she was around. 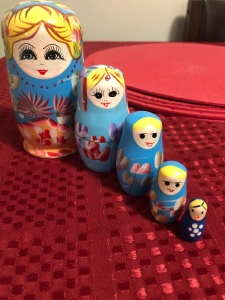 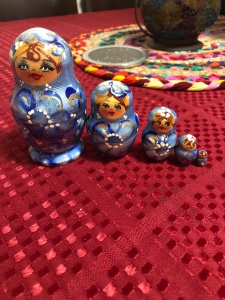 “Let me talk to the Matryoshka doll, the strong matriarch; give her the job of guiding your life.” It seemed like a plan, a better plan than anything she had cooked up previously. Rather than the dolls being left in a line, disengaged from each other, they were put back together, contained in the elder doll. Back together, where they belonged. The angry adolescent, frightened child and vulnerable young woman weren’t left behind. United and celebrated. All the ages were back where they belonged, with Mama handling business from a grown-up’s perspective and experience. She seeks solutions, whereas the younger dolls seek only to run, to escape discomfort. It may have kept her alive once, but not now. No, not now. She is finding that it’s a comfort to be an adult; to take charge, and stop scaring herself to death.

I love this suggestion! Being single can be incredibly lonely at times, with one going days without talking to another adult. However, let’s not wait to be celebrated (and we certainly don’t need a day reeking of tokenism to confirm our worth). Dress in a flourish of red, and get out into the world!