When I was in Primary school, the Government funded a scoliosis screening program, to pick up worrying curvatures early in a child’s life. At the time, I passed the screening with flying colours. Then, I broke my back. A few years later, after numerous surgeries, I was informed that my hip graft had failed, and I had scoliosis to such an extent that my heart, lungs and stomach were being crushed. Without major surgery, I would die. I was seventeen when I went into hospital to have this surgery. I had previously spent two years in a body brace, which unfortunately couldn’t save my spine, as the problem stemmed from the grafts failing. They at first opened my chest, somebody holding my heart whilst ribs were removed for grafting and put in via the front. Then I was turned over, and they operated on my spine, installing Harrington rods, screwed into place. I was later put in a fibreglass body cast. 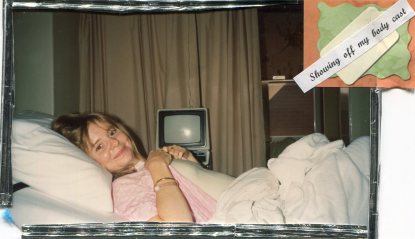 My scoliosis was rectified enough to save my life, but the rods had to be taken out at twenty, and later fractures in my spine have seen the scoliosis worsen. I live with a monumental amount of pain now.

I worry when I see kids slouching, quite often unable to sit up straight with shoulders back. I am also concerned with the weight young people carry in their backpacks to and from school. It is as though they are carrying bricks around! It is essential that scoliosis is discovered early, before long-term damage is done, and requires surgery. It affects future pregnancies, the work you can do, and your general wellbeing.

My friend’s daughters were diagnosed early, and whilst they require bracing for a few years, they shouldn’t need any treatment beyond that. My friend has set up a petition, to urge our government to bring back screening within our schools. If we can prevent even one child from enduring hell later on, it is worth it.