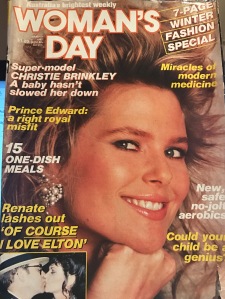 Elton John was married to Renate Blauel and Michael Crawford was on stage in Phantom of the Opera.

There was a feature on Celebrity Homes, with pictures of Liberace, Rock Hudson and others.

Joan Collins had started seeing Peter Holm. In good news, stress increases your metabolic rate! A recipe recommended orange juice, sugar, gin, instant coffee and ice as a refreshing drink. It goes without saying that a man requires a hostess and elegant wife to not only cook, but charm his colleagues. It is apparently expected and a lady can look at it as being her “job” as a wife.

Elizabeth Taylor and truck driver Larry Fortensky were an item, as was Kim Basinger and Alec Baldwin. Cigarette companies were still running competitions, and the latest innovation was a rechargable vacuum with a torch on the end! There were no hair straighteners, only curlers and crimpers.

Nicole Kidman was 23 years of age, and engaged to Tom Cruise. The movie Ghost was a hit and reduced-fat foods were becoming popular. Julia Roberts and Kiefer Sutherland were going out and fridges that automatically defrosted were beloved. Forty is considered old! Apparently, Mick Jagger-at 47- is exhausted from touring and at his advanced age, is looking forward to being home with Jerry Hall and the kids!

One thought on “Old Magazines and Time Travel (part 2)”