I stopped in at The Bower, a darling little shop in Parramatta that sells everything from pre-loved tea sets to furniture. To my joy, I found magazines for 30 cents each, some dating back thirty years. It was extraordinary, the information on the pages. So much has changed regarding everything from medical advice to technology. Here is a quick run-down:

Six cigarette advertisements in one magazine! In Hollywood, Dudley Moore and Christopher Reeve were out on the town with their respective partners.  A feature on a lady who started a bread-making  business boasted that her success lay in using only high-gluten content flour! Porridge with dried apricots was apparently a popular breakfast! Peter Russell- Clarke was our most popular television food presenter, and featured in ads for Australian cheese.

Sanitary ads featured smiling women in pastel shorts, running and swimming. Laxatives (that could unblock a drain), were liberally put on show, and used as an adjunct to a healthy lifestyle, whether you needed them or not! Monstrous vacuums were the order of the day, as were video clubs. Send a cheque, and you would be the recipient of several family video-tapes in 28 days! 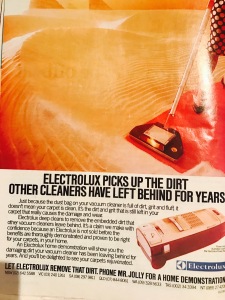 Princess Diana was featured heavily, as was 46-year-old Raquel Welch. Shirley MacLaine’s Out on a Limb autobiography had recently aired as a mini-series in the US. In cutting-edge news, there was incredulous talk of laser surgery to improve eyesight. Could it be a reality?! 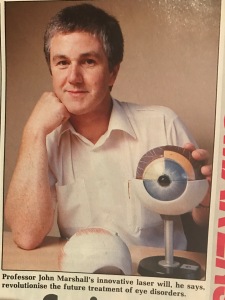 Retirement plans were aimed at those aged 55 years upwards, with no talk of working beyond that age. Shoulder pads are huge. 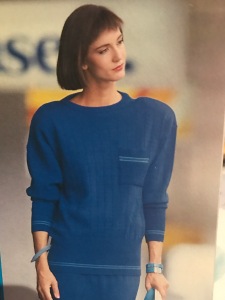 Elizabeth Taylor was 55, mineral water and oat bran were served at health retreats and cane furniture was in.

Glass brick windows afforded light and privacy, and Brandy Alexander pie (complete with marshmallows), was a popular dessert! OCD wasn’t then a known term, and what was coined as a germ phobia was usually treated with heavy medication. The strongest sunscreen at the time was factor 15+