It was as much my daughter’s day as it was mine. A day of remembrance. To contemplate what was taken and what has in turn been bestowed. She has had her life altered as a result of that July 25th long ago. This term, I can’t commit to taking her to drama classes in the city, as I have to attend to this chronic pain once and for all, and have viable pain management strategies in place. She doesn’t complain when I can’t take her out, nor does she wonder why I fall silent on the way home after a long day. She comforts me when she sees the mask fall and views the agony in my face. I haven’t been able to do all that I want with my daughter as money has gone on maintaining my health. I can’t run like other mothers, nor skate or ride horses with her. Her life has been shaped in so many ways by what happened to me. I didn’t tell her the date’s relevance, yet she knew it was a big, important date. 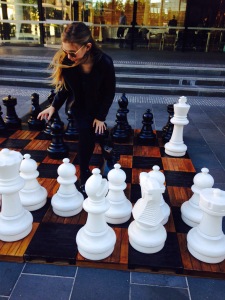 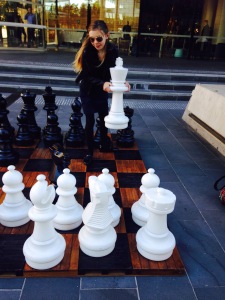 Being a ham, she had to strut into a bank through its turning doors, pretending to be a banker. To the mirth of the employees, she shouted, “this isn’t my jam!” and ran out. She then discovered this chess set, and was annoyed that a King was overtaking the others. She sought to rectify things.

We spent the afternoon hanging out, having fun. I have learnt that it does no good to not acknowledge the memories, nor try to have an ordinary day on the anniversary. What I needed was to see beauty; to be pulled out of my own mind. It helped! 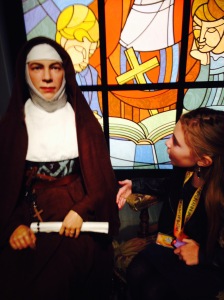 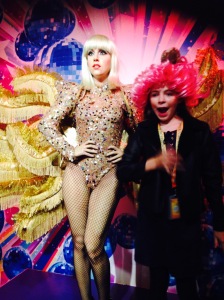 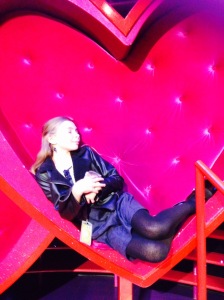 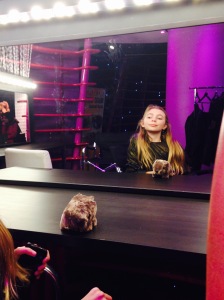 As we left home at noon, I was flooded by intense gratitude. All those years ago, I would have given anything for what I was able to do this particular morning. Wake in a comfy bed in a secure home, then shower and dress. Have a nutritious breakfast and a pitcher of water. To look forward to the day. All the things you take for granted… As dusk fell over the city, winter began to bite, and I felt the cells in my body grow anxious. Dusk was when the final torment began. We walked to the Lyric Theatre, and stood enjoying the celebrities walk the red carpet, my daughter eating a croissant. I lovingly brushed the pastry flakes from her hair, and tried to avoid embarrassing her by crying out of sheer and giddy joy.

The award show surpassed all expectation. It was thrilling to see Matilda receive thirteen awards. The Australian Theatre for Young People won an award for the sublime Sugarland. Supporting the Arts is incredibly important. It takes us out of the everyday, into a world of unequal splendor. It is no coincidence that musicals hit the height of their popularity during the Great Depression and wartime. We need to transcend the drudgery once in a while. We need the Arts to give us different perspectives and to provide commentary on the times  we live in. Griffin Theatre’s The Bleeding Tree won Best Play, and when accepting the award, it was hoped that the piece about domestic violence would be viewed in the future with a shaking of the head, and the utterance of “this is how it was back then.”

When Bangarra Dance Theatre’s Artistic Director, Stephen Page was honoured the  JC Williamson Award, his speech left us spellbound. There were magical performances from musicians, musicals and dance companies. Water escaped my eyes and I gave thanks that I got to see this night of celebration, and as I slumbered that evening, July 26th rolled around without fan fair.  I also got to see the dawn. The evening reinforced that we must tell our stories, not only for our own sake, but for everyone’s. I look forward to somebody in the future stumbling across my work and saying ‘things were different back then! Thank goodness we live in better times.’  Times when perfect storms in a young person’s life are abated, before they are consumed by a wave. We are on our way. No more secrets, nor hiding of abuse.

If you have a painful anniversary coming up, I would advise you to acknowledge it. Write about it, or create art around it. Plan a special day with loved ones who get it. If that’s not possible, then go out by yourself. Eat and drink delicious things. View beautiful things. Talk to strangers. Whatever you do, don’t curl up alone with the memories. In my view, such a day has to be tempered by art; it’s potency diluted by loveliness.