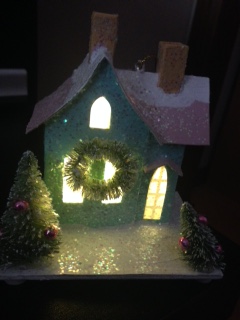 Last week, we moved house. It has been a long time coming. Five years in one home was a record for me, and it wasn’t even comfortable. It didn’t feel like a sanctuary. You get “stuck” in a place or situation without realizing it, and the thought of moving… Friends dropped boxes off throughout the past six months, and I slowly packed them and moved them into the garage. I thought I had de-cluttered sufficiently. We organized mover’s and cleaners so that we wouldn’t have to ask anyone for help. I geared myself up for the inevitable pain I would face with the rigours of moving, and my spine didn’t disappoint. A few days before, I lost control of my right arm and my bladder. Half of my spine went numb; the other portion was agonizing. I was amazed at my ability to peak before the main event! I told loved ones that I would sort out the new place within four days then have a good rest. After a period of a week, I would return to society. I was rather pleased that I had a hired team and wouldn’t require any assistance. 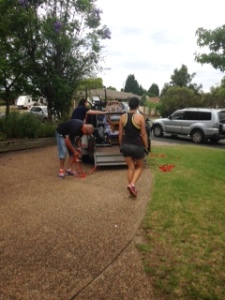 The day arrived, and I couldn’t wait. I had swept up all my memories, and was taking only the good with me. I went to the new place early, imagining where everything would go. I noted that the movers had put some boxes in the garage, and remarked to my friend that they were “lovely young men.” They didn’t make a reappearance and I was told that they weren’t at our old place either. We rang their mobile but it was switched off. “They must have gone to lunch,” I kept repeating to myself.  We rang their boss who informed us that they had left and weren’t coming back. They had taken their fee from the credit card! Crap!!! We had a full house of furniture to transport and half a day to do it in. Hurriedly hiring a truck, we asked if anyone was around who could help. A fellow listened to our tale of woe at the reception area when we got the truck, and would you believe he turned out to be one of our new neighbours! He insisted on helping. Mums, children and men gathered, and the moving began. I burst into tears when I saw more friends alight from cars. Some brought food and cold drinks. An elderly fellow around the street from our old place was one of those who offered. It was a heat wave and I was astounded when they brought in wall units and fridges with a big smile on their sweaty faces. 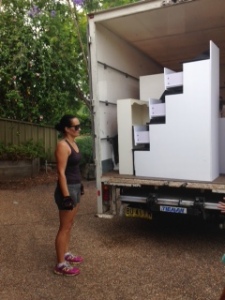 I kept saying “thankyou,” until they could bear it no longer and demanded I be quiet. I heard the children laughing and playing together in the garden. We had a gathering of good people, sitting under a fan, sharing their lives. An elderly man told me about being a ward of the state and growing up in an orphanage and how he is shy and lonely. “You are doing okay with this group!” I assured him. He mentioned what lovely friends I had, and I nodded. “They’re the best.” They brought in our old tattered furniture with great care, the last of the group leaving at 11pm. The next day, we informed the movers that we would go to the Department of Fair Trading if the money wasn’t put back in our account and begrudgingly, they relented. 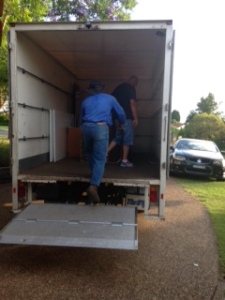 Beautiful furniture was left at our door-gifts from a dear friend- and food was delivered. What a dichotomy, to experience scoundrels and angels on the same day. I went out to the garage and looked on in dismay at the multitude of boxes stacked to the ceiling. Why had I kept so much? I could have halved it before the move! I felt overwhelmed as to where to start. A little dog from across the street broke away from its elderly neighbour and ran into my garage. It lifted its leg and peed on a box. I laughed and laughed. Maybe it was a sign?! I organized the house within four days, and then crawled into bed. I am about to re-emerge from my cave.

We couldn’t have our Christmas Tree up at the old place as there was no room. By a miracle, it was the first box we unpacked, and we set about decorating it. As each ornament was slid onto a branch, we gave thanks. Thankfulness for new beginnings, a beautiful home and for the best friends anyone could have. I have learnt that it is okay to ask for help, and that whilst there are scammers and shysters’ creeping around, waiting to pounce, there are more good people in this world. On the 1st December, I felt the power of the Christmas Spirit. It is love, kindness and servitude. It blessed my new home with its presence.