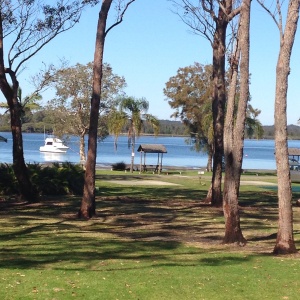 Camp was amazing! I feel that I am not the same person who left home a week ago. Staying places by myself (albeit with child), is not something I have done much of, and certainly not so far away. It was mainly to do with safety, and gradually it was born of terror. Fear isn’t a strong enough word. What if something happened? What if I fell sick? I would be all alone. Can I rely on myself? The answer was that I could. We left early afternoon, and by the time we were an hour away, dusk was folding in. I had visions of driving around in the dark, unable to find the place! “Breathe though it,” I told myself. I tremulously opened the door to our cabin and was astounded at how lovely it was. I got a great deal as it was off-season. In my adult life, I have only had a few short breaks away, all available funds going into IVF and surgeries. The kitchen was bigger than mine back home! My daughter had a great deal of fun exploring! That night, I had the best sleep I have had in years, and actually slept in! We then met our fellow campers. My daughter was asked to play spotlight by an older girl and delivered back to the cabin afterward. It meant a lot as a mum.

She organized her social life with a little friend for the next day, and met up at 9am for putt putt golf. When we went to get supplies from the local supermarket, she found a little tree frog at the doors. She brought it back to the cabin, and lovingly placed it in a box filled with grass. She found the perfect spot to relocate him, brimming with frogs, and went by herself to release her tiny friend.

It is officially Spring here in Australia, and whilst the sun beamed down, the swimming pool was still freezing. Things like that don’t matter to kids and she took the plunge. The women gathered as the kids played, and I found their intuitive, compassionate take on child-rearing and schooling awe-inspiring. They were my tribe, filled with artists, students, dancers and writers. We went on a koala walk, where the kids found buried treasure. The day ended at the fire pit, telling each other stories. 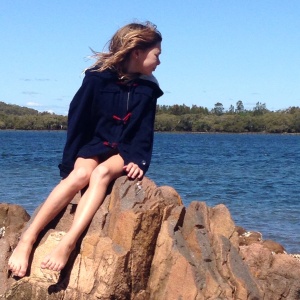 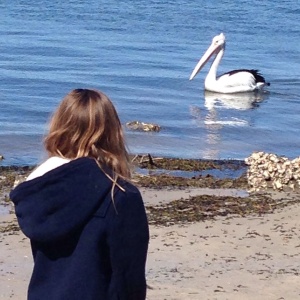 The next day, we tried hula hooping. To my amazement, I could sustain a weighted hoop, once I had been taught to take a step, rather than try to swivel it (impossible with a fused back). One of the new friends I made was a single mum, with a remarkable child and 5 week old puppy. The puppy considered my cane more of a prize than the stick he was offered, and ran off with it! It took some coaxing to get it back. This mum was an astoundingly gifted artist. Mainstream school wasn’t working for her child, so she packed up their life. bought a camper van and car, and hit the road. As her child played with the kids and his puppy, I was privileged to witness a young life restored with the joy it deserved. The cruel taunts of classmates was being replaced with the reinforcement of other’s encouragement. How brave and inspiring was my new friend, to leave her old life and plunge into the unknown? I hope their lives are filled with the peace they deserve. 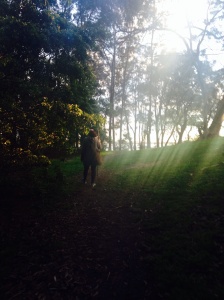 We played board games in my cabin that evening, the kids overtaking us at Beat the Parents. There was much laughter and irreverence and happiness. I had nowhere to go and had abandoned my to-do list. I had stopped and was living in the moment.  I hadn’t realized how stressed I had been. I slept brilliantly when removed from it all. On the way home, we stopped at a wildlife sanctuary. My daughter loved the piglets and gravitated to them at feeding time. She also fed wallabies. 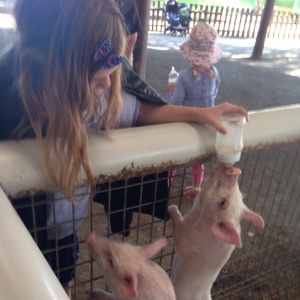 She went on rides and we were hugged by an enormous Drop Bear! To the uninitiated, visitors to Oz are sometimes warned that koala bears drop out of trees and get quite cranky. Of course, it isn’t true!

We could have gone out on the water and seen whales and pods of dolphins, but the days were filled with connecting, walking and resting. We came home ready to continue on, bolstered by the friendships we had made. 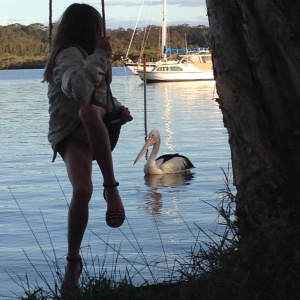 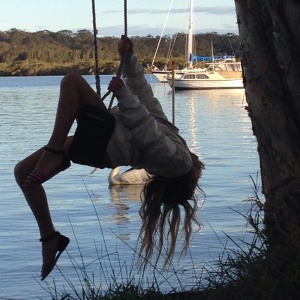 10 thoughts on “Camping, Frogs and Friendship”