Perusing the commentary on social media, there are apparently people who don’t believe that we need to march in support of women’s rights. That would be welcome news for  the thousands who marched in Sydney last weekend. If only it were true… We demanded the right to feel safe on our streets, our thoughts turning to Aiia Maasarwe, the vibrant young student killed in Melbourne. She will never be forgotten, and was certainly remembered Sunday. It could have been any one of us…We traveled into the city with a woman who had survived domestic violence. She left her marriage when pregnant with her youngest, and has been to hell, lingering to grab other’s from it’s fire. We stood spellbound, listening to Yumi Stynes, Aunty Norma, Jane Brock, Rae Johnston and Bri Lee. If you can imagine several thousand people, silent and keeping space for the speakers, the trees themselves staying as still as the air. The peace was occasionally broken by rapturous applause. As we began our march past the courts, my friend began crying. So many of us had experienced violence in the past, and being part of a collective was in direct opposition to how alone we had once felt. “Things are going to change for our girls,” I whispered, hoping I was right. 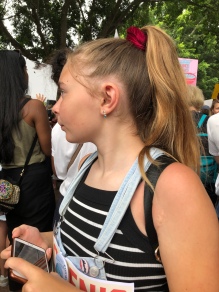 I have witnessed girls being too intimidated to play at a local park, right near their home, after boys demanded that they be their girlfriend. They refused, and the boys didn’t like it. Now, they will only go to the park accompanied. I have seen cat-calling of eleven year old’s, suggestive messages left for them in their bags. I had the displeasure of traveling on a train with two teenage boys the other day. By the looks of them, I would hazard a guess that they were sixteen years old. One was talking to the other about sending “a chick” pics of their anatomy, and demanding that she do the same. The way in which they were talking, and the phrases they used to denigrate young women, made my skin crawl, and I let them have it both barrels. Once upon a time, the defence brought up the fact that I was on the pill as an argument in court. Never mind that I was taking it for severe period pain, later diagnosed as endometriosis. Certainly never mind that it had nothing to do with my being raped. I have seen misogyny at work, and felt it’s cruel aftermath. I have met gentlemen and fabulous boys too, many of whom took part in the march. They give me renewed hope.

Do you know how hard it is to leave an abusive marriage? Even if you are the one fiscally responsible, adept at paying bills and stretching money, real estate agents prefer to have a husband’s name on the lease, particularly if you are at home with small children and he works full-time. So many things in your husband’s name, and none in yours. There are many ways to feel trapped in this world, and a lot of rabbit holes to disappear down. My daughter was asked by a reporter why she was here. She said “because my mum was hurt badly when she was a teenager, and women and girls deserve to feel safe and respected.” We sure do, sweetheart. Her friends chatted to the reporter too, adding their heartfelt sentiments. They are the daughter’s of  women who rose like the mythical phoenix, and shall be silent no more.

The call was placed for a Safe State, a list of recommendations put together by frontline workers and experts to end family and domestic violence. You can show your support here.