OJ Rushton, musical director of the Ozy Youth Choir Honouring Defence Service, had a dream. She invited kids from the Southern Highlands and bush to come together and join her fledgling choir. Some of the kids had parents in the military, and all immediately felt a sense of belonging. The lessons are completed online, though the choir regularly meet up for rehearsals and camps. I heard about the Ozy Youth Choir via another parent. My daughter and I went along to a performance to see what it was all about. Within moments, I had been embraced by OJ, and my daughter had been given a choir shirt and was singing! We experienced a home-coming, as though are souls had been searching for these very people. It felt as though we had landed on a puffy cloud, surrounded by alto and soprano tones.

Throughout the last three years, my daughter has had the honour of singing at Government House, at the Australian War Memorial, alongside Damien Leith and Harrison Craig, Ian Moss, Laura Wright, Kate Ceberano, the Australian Army Band and many others. The highlight would have to be singing at the opening ceremony for the Invictus Games at the Sydney Opera House. It coincided with our camp, and what a week we had! Concord RSL kindly offered us the use of their old bowling green to set up our tents, and went above and beyond, gifting use of a kitchen and showers and providing us with food and transport to and from rehearsals. The heavens opened up on the second day, and the camping ground was flooded! All we could do was laugh and try our best to keep dry! The choir worked hard, returning to our base late most nights.

Finally, the day of the opening ceremony arrived! The parents looked up as an ominous clap of thunder sounded over Sydney Harbour. Then, the lightning came, along with torrential rain. The massive storm delayed the start of the show by an hour, and then it departed as swiftly as it had arrived. The memories of the opening ceremony shall remain with me always. We cheered on the athletes, listened to sublime music, and everybody stood and gave Prince Harry a standing ovation after he delivered his powerful speech. The kids understood how pivotal this event was for the athletes, and all who came to support them, and felt deeply honoured to have been there. 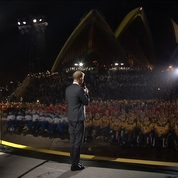 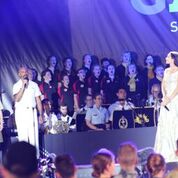 The choir got back to camp shortly before midnight, and woke at 5am the next morning, to prepare for a breakfast at the Australian Museum to honour the families and dignitaries connected to the Invictus Games. My daughter still talks about Elisabeth, who is a member of an organization called TAPS (Tragedy Assistance Program for Survivors). My daughter had sung with the choir outside the Sydney Opera House, and had held Elisabeth’s hands. This dear lady explained to me at the breakfast, how much this had meant to her, showing me a photo of her son, Toby, whom she had lost in Iraq. Singing helps to heal; it reaches into the core of a person, assuring them that they aren’t alone. It is a way of telling stories, and uniting people. Here is a video, detailing our time at Concord RSL and the leadup to the Invictus Games. After the breakfast, we walked down Art Gallery Rd to cheer on the athletes competing in the road cycling. We were in awe of them beforehand but nothing prepared us for how we felt afterward!

We were also honoured to have joined with Invictus as a Peace Partner to launch the Peace Project at Government House two week’s ago. Several schools joined us, both online and in person. Here is some footage of the wondrous day! Last year, the Ozy Youth Choir reproduced an iconic photo from a century ago, on Bondi Beach, in honour of the Centenary of ANZAC. On Friday 2nd November, we shall be gathering at Government House in Sydney, to do it again! We shall sing as one to honour the end of the Centenary of ANZAC and to welcome in the Centenary of the Year of Peace. His Excellency, the Governor of NSW and Mrs Hurley are hosting the  Sydney Peace Project on the Parade Ground. Join us at 1pm, either in person or online. Registration is essential. Follow this link to join!

Studies have shown that those who engage in singing enjoy better health. I can understand why, particularly when you sing with others. Coming together to sing unites us as one unstoppable, unflappable, powerful force.