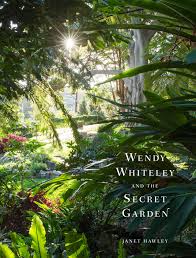 I was asked along to a talk at the North Sydney Community Centre this past week, to hear Wendy Whiteley and the esteemed journalist, Janet Hawley, talk about the paradise behind the lush tome, Wendy Whiteley and the Secret Garden. Janet has written a heartfelt and intelligent book about her friend, and also of the remarkable history of Lavender Bay. Jason Busch’s photography is outstanding! It is the ultimate coffee table book. Wendy appeared first, her hair wrapped in an elegant black scarf, a sprig of lavender pinned to her jumper. She had a commanding presence, and hypnotic crystal-blue eyes. Janet Hawley sat next to her, an elfin lady with a dulcet voice, and to our delight, Costa Georgiadis from Gardening Australia was the interviewer. He confessed that he had only been to the garden for the first time the day before. He had fallen under it’s spell in an instant, and plans to help out there for many a year to come.

The garden in question was started over twenty years ago, after personal tragedy touched the artist and muse’s life. Wendy’s husband, the great artist Brett Whiteley,died in 1992, after which Wendy turned her attentions to the wasteland in front of her home. Her daughter, Arkie, was an ethereal spirit, and fine actress. She encouraged her mother’s endeavors; buying her plants for the project. Tragically, she succumbed to adrenal cancer. Losing her only child saw Wendy turn to the garden once more, for comfort and reprieve from the agony of her loss. The garden was built on land adjoining Wendy’s home, which was owned by  Rail Corp and later leased to North Sydney Council. It was neglected and overgrown with weeds. Wendy used her own money to turn it into paradise. Visitors from all over the world come to relax in this spectacular garden, and all that is asked is that they’re respectful and take their rubbish when they depart.

In a sensible outcome, the State Government has extended the lease to thirty years, with a thirty year rollover clause. Wendy would love to be given assurance that a stable of sturdy volunteers shall keep up the garden after she departs, putting in money, resources and time. She needs to have a website constructed, so that people can have a central point to gather information and leave feedback. The Secret Garden will also require a generous soul to manage its social media.  This glorious garden is her gift to Sydney. I believe that a dream team of volunteers shall come forth, and help out in the decades to come. I hope that the State Government can commit in the longer term to her vision regarding the necessity of parkland by Sydney Harbor, to bring in tourists and for the pleasure of locals. How awful it would be if Sydney were to lose it’s soul to developments suffocating every square patch of green land.  It was a daring act by Wendy, to create our first guerrilla garden, and I am in awe of her commitment. She turned a wasteland into a place brimming with life, and her grief into an exquisite  garden. I shall never forget meeting the iconic Sydney artist with the hypnotic blue eyes and the wondrous Janet Hawley.