My best physical feature would funnily enough, be my backbone. I was young and invincible when it was shattered. Man it hurt! I learnt I have more backbone than I gave myself credit for. Laying on the ground that night, I was still thinking of ways to get away from him. Violent men are cowards, and he ended up running away, after dragging me across the ground and hearing some of my bone’s snap. I learnt I would need a huge operation, and I remarked that  I simply wouldn’t allow it. The surgeon looked at me incredulously. I was pumped full of morphine which I believe gave me more bravado. Having to lay still for months terrified me. I couldn’t wait to run. Run from this nightmare. It was too risky to move me, so I had to stay in my rotor bed during the surgery. They could flip me over with safety inside this wondrous vessel. It strangely arrived the morning of my fall, and hadn’t even been unpacked. The staff had to watch an instructional video before I was placed on it. I wasn’t  a Catholic, but the one who was with me before and after surgery was dear old Father Spencer. He had a soporific voice which soothed me. I wish I had recorded his voice for posterity. I had a dear Scottish lady, named Veronica in the bed next to me. After a few months of catheterization, she hollered with great excitement, in her thick Scottish brogue, to the men in the next room along, “the lassie took a piss by herself!” 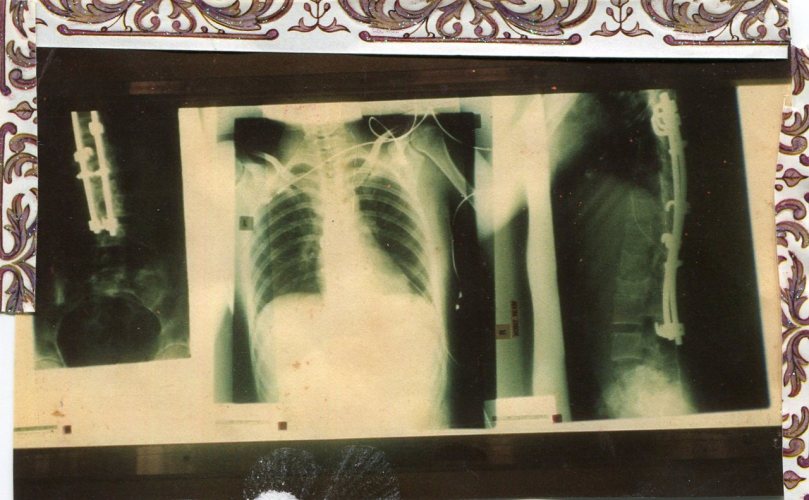 By seventeen, my spine was so caved in that I couldn’t breathe properly, nor digest food. I needed more surgery to save my life. They went through the front, somebody holding my heart in their hand. They carved up my ribs to “prop” up the scaffolding. Flipped over, they installed the hardware. Body casts followed, as did a big recovery once I was out of ICU.

Falling over and breaking my back (again), in three places five years ago, that blew. My little girl and I performed a clumsy dance throughout my recovery. I gave her “koala bear cuddles,” her weight distributed evenly, thus saving me pain. She was a champion. This back  has been bludgeoned, collapsed in on itself and had all manner of egoists and healers in there, doing their thing. It is a short spine, inflexible (stubborn), like its owner. You should see me try and do yoga! Its adorable! I pray my knees never go, as I use them and my hips to move and get down (and up). My daughter loves my spine, and is intrigued by its scars, which we have named. Harry is named after an eccentric artist I knew, and he winds his way from my stomach to the centre of my spine. Louie is the scar where they did work on my lung. Marilyn is the scar on my hip bone, and the wide scar along my back is Raphie. Defiant Raphie. My backbone has been reinforced, so woe betide any villain who approaches! Woe betide indeed!

Today has already been remarkable. A Bowen therapist invited me to her place for a treatment. She has a property on top of a mountain, with a view guaranteed to stun. I haven’t felt so relaxed in a long while. We chatted and laughed, and she remarked that a red-breasted finch was on the windowsill as I lay on the treatment table. I was humbled by her gift this morning, as I am to see a neurosurgeon this afternoon.

Try as I might, I can’t escape the fact that this isn’t any old appointment. I wouldn’t be going to this surgeon  if it weren’t for a series of events, a long time ago. I patted the scars dry after my shower this morning. I told my friend, the Bowen lady, all about what had occurred for me to be on her treatment table. I survived, yet the legacy lives on. A day off work for my husband. $220 to see the medicine man. I feel like I am back on a ride. A teacup ride. It promises to be a harmless kiddie adventure, though when the operator sees me, he spins and spins and spins that teacup. I am still spinning. A man broke me many years ago. Today is a part of the journey toward having a future. Surgery may be required. That’s okay. I surrender my anger, my indignation, and accept the unfairness. I feel calm. A Bowen practitioner worked on me this morning. A finch landed on the windowsill and peered into the cabin. I met her goats and saw a vista. I am at peace. I am ready for my appointment.