The Saturday started off with a vibe of foreboding. We had errands to run at the local shops, and my back pain was a 20/10. It was so bad that I had to take one of my night-time medications whilst I was out, just to cope with the travel back home. I couldn’t have walked another step without it. Back home, I had a bath, and rubbed every liniment I owned onto my spine. I zapped my back, braced it, and would have chanted had it promised to help. I had no time for this nonsense! We were all packed to go see our dear friends on the Northern Beaches, and I wasn’t going to let anything stop us. My left kidney is twice as big as the right, and my spine is putting pressure on it, and other organs. My spinal canal is so narrow that they can’t loop wires up it to fit a spinal cord stimulator. Still, I press on. I have to ensure that my determination at the very least matches the force of the nerves being crushed. Yay! we made it onto the bus toward the station. I bit my lip every time we went over a bump, to the point that the inside of my mouth started bleeding. The train came on time, but then stopped abruptly at regular intervals. Apparently, the Vivid festival had caused public transport chaos. I started to feel anxious, knowing that I only had a finite amount of time before the pain ramped up again. I wanted to be safely encased in our friend’s home when it did.

The train stopped before Circular Quay and we were told that we couldn’t proceed for a while. Thirty minutes later, we rolled into Wynyard station. We needed to get the B-Line bus to the Northern Beaches, and there was nobody around to tell us where to go. We wandered the perimeter outside the station, and missed the first bus. My confusion grew, as the pain ramped up. Taking deep breaths hurt, as did trying to correct my posture. My right leg went from under me, leaving me with one functional leg, a walking stick and suitcase. Dismayed, I thought about returning home. I knew I would feel worse if I abandoned the visit we had all been looking forward to. I was halfway between home and our friend’s. Exhausted, we hopped on the next bus. I was climbing the walls in pain, and there were no seats. My daughter watched as commuters got off, and was on her way to secure a seat for me when a guy carrying a case of beer pushed past and sat down. She was having none of it, and demanded that he get up; that her mother needed the seat more than his beer!

An hour passed, and when we alighted, our friends were waiting. We were encased in hugs and love, and fed a curried vegetable pie. We listened to the Beatles and the next day, went to the beach. If we hadn’t gone, I would have felt sad at what the never-ending pain has taken from me. I would have felt awful for my daughter and our friends, who would have been understanding, but nonetheless…I would have missed the last hot day before winter curled it’s icy fingers around Sydney. I would have missed so much. Beauty, love and art… That is what makes life bearable. Particularly if you are going out of your mind with pain. 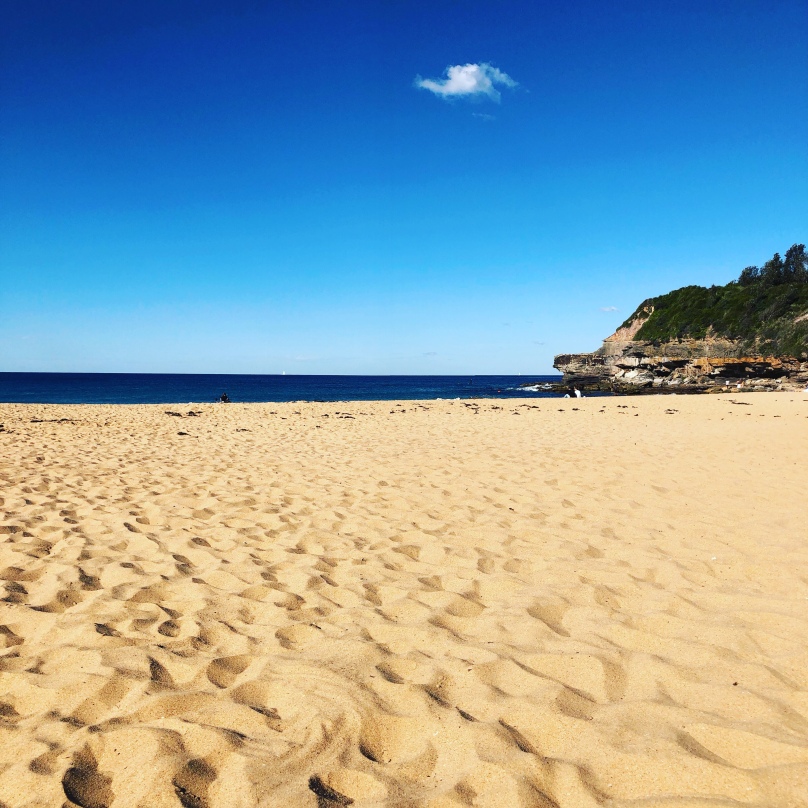 2 thoughts on “Halfway between Home and the Northern Beaches”